The mobile gaming market is huge. One-third of all mobile downloads in the world are games, and to top it off, 74% of all spending in the app store in 2018 came from mobile games.

When you factor in that 10% of all time spent on mobile devices is given to gaming, then it’s no surprise at all that gaming is the #1 most popular app category (at least in the Apple App Store, as of May 2019). 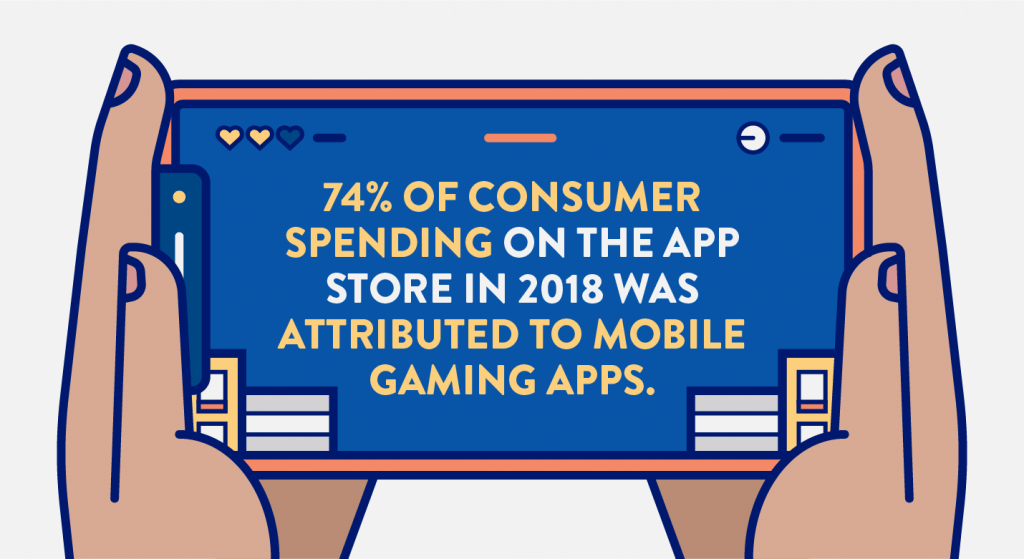 How does the industry market their apps so effectively that people choose to spend not just time, but money, buying games or in-app purchases? And what universal lessons can we learn from the mobile gaming market that we can use in our own brands?

Get Influencers Playing Your App

What better way to get in front of potential gamers than to use the influence of those who are already streaming their gaming sessions online? Or posting regular game reviews and walk-throughs? We’re talking, of course, about influencers in the industry — and in this case Twitch and YouTube streamers.

A prime example is Ninja, (born Richard Tyler Blevins), who rose to internet stardom thanks to his jaw-dropping gameplay videos and his exhaustive gaming tutorials on YouTube (22.4 million subscribers) and Twitch (14.6 million fans).

A more down-to-earth example is FGTeeV, a fun, gaming family who regularly post videos that showcase the video games they like to play together — anything from the latest platform console games to the hottest mobile games. Sometimes their dad even sings rap songs… but still about video games, naturally. Their reach? 12.3 million viewers.

We all know there’s nothing quite like having your mobile game achieve viral status. But that kind of thing happens once in a blue moon under the right kind of circumstances. So what kind of marketing can prime the pump so that your game gets talked about and shared online? Good old user-generated content.

A recent example of this was Fortnite: Battle Royale and its huge leap into the zeitgeist with its online dance challenges. Everyone from children to professional athletes were aping the dance moves in the game. And the game isn’t even about dancing! It’s a free-to-play shoot-’em-up with some creative elements that breathed life into what was originally a dying game.

Fortnite allows players to buy costumes for their avatars— as well as avatar dances. And this is the magic pixie dust: when a player kills another player, they can celebrate with these avatar dances (called “emotes”). Basically, they’re signature moves expressing victory, and can range from a simple fist bump to dancing the macarena on top of their vanquished opponent.

With more and more users playing the game (since it’s free), the dances started entering into the public consciousness. And pretty soon, people were taking videos of themselves doing the dance moves and calling it the Fortnite Dance Challenge.07

Suffice to say, developer Epic Games have turned their shooting game and those victory dances into $756,504 worth of daily revenue and approximately 13,926 daily installs.

With around 18,224 daily installs and a daily revenue estimate of $1,681,34109, Candy Crush Saga has dominated the mobile game market since it first entered the scene in 2012.

Their winning formula starts out with its game play. The game possesses a combination of cute, likeable graphics, easy game mechanics, and forced scarcity (only 5 lives) to create an addictive experience that leaves you begging for more (by literally sending requests to Facebook friends) or paying $0.99 cents to continue playing instead of waiting for the timer to reach zero. Either way, the developer wins.

Sending Facebook requests results in a constant stream of new users as well as engaged users who are eager to keep playing. And that flood of 99 cent in-app purchases? Revenue for the company.

Alongside shrewd psychological tricks to keep customers playing, the developer King.com also used influencer marketing as well as traditional marketing strategies like cross-promoting their game with other casual games and TV advertisements to promote their brand. End result: Candy Crush Saga continues to be a revenue-generating beast well after many of their copycats have withered and disappeared. 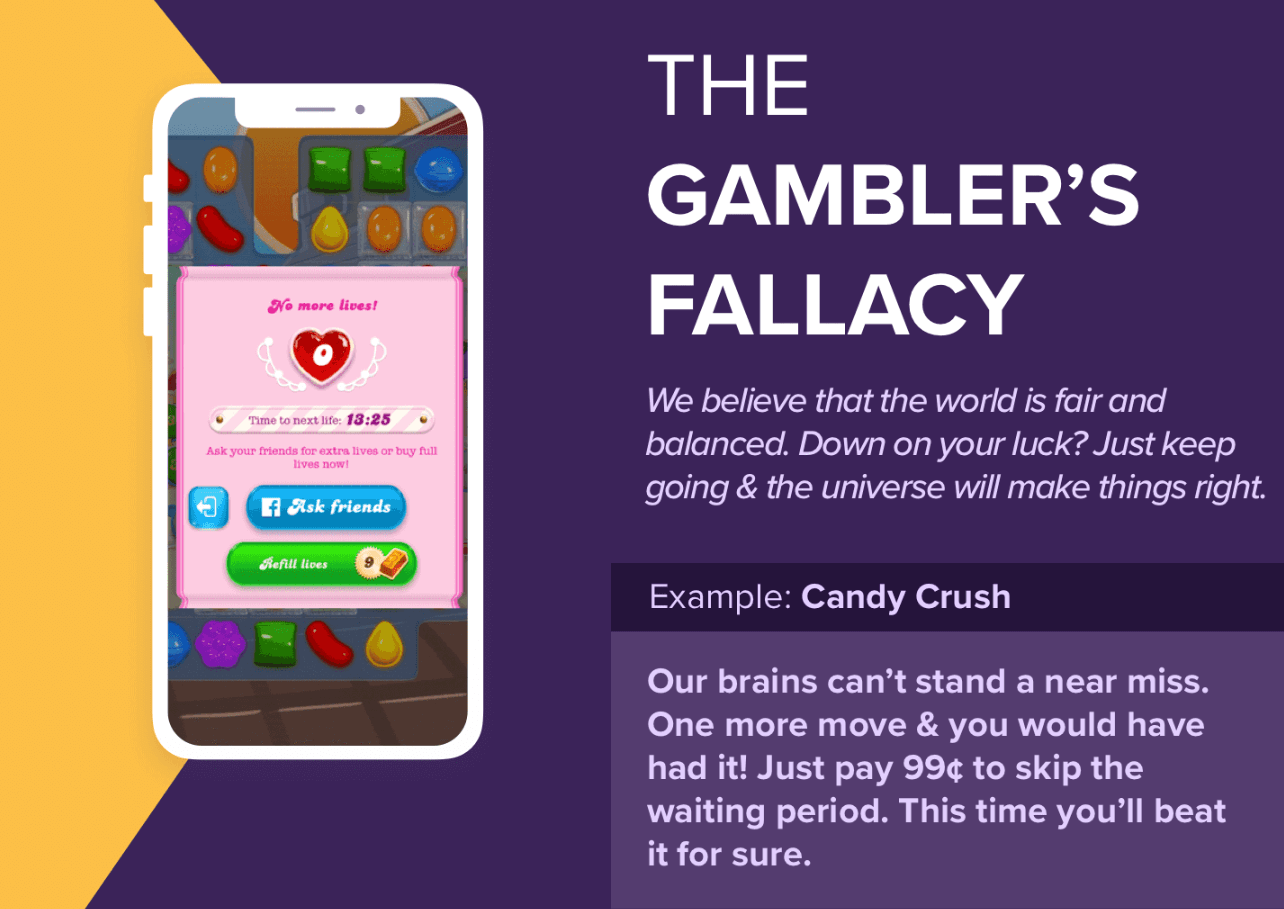 Or you could go in an entirely different direction and pay celebrities to endorse your games — or maybe even star in an advertisement for your game.

One of the most memorable was Supercell’s 2015 Super Bowl commercial for their game Clash of Clans, which featured Liam Neeson and a bastardized version of his speech from the movie Taken.10

A similar foray was done by developer Machine Zone for Game of War: Fire Age, whose one-minute ad featured supermodel Kate Upton as the goddess Athena, traipsing along a violent battlefield straight out of Game of Thrones, complete with dragons. That ad cost $40M and was followed by a massive ad campaign that inundated every corner of the web back in 2014, helping bring awareness to the multiplayer game and catapulting it into one of the top grossing games on mobile at the time.

Build a Tribe and Sell Them Experiences

oblox is another candidate consistently in the list of top grossing mobile games with around $398,631 in daily revenue and 15,415 daily installs.12

The massively multiplayer game for all ages has continued to rise in popularity due to two main factors: a gigantic, supportive community of (mostly family-friendly) players, and a thriving economy of in-app purchases.

First thing you need to know is that Roblox is really more of a game engine. Or if you like, an app store where you can choose what to play. There is no single parent game that you’re all playing. Instead, you can choose from several thousand player-created games in every genre: puzzle mysteries, shooting type games, or simply… hanging out with friends.

Secondly, it’s relatively easy for users to create gaming experiences on its platform. And if it’s popular enough, users can even monetize their created games via the in-game currency Robux.

Creators band together to build microbusinesses selling virtual goods for actual money. They earn by taking a cut on in-game purchases for anything from costumes, backgrounds, or props to entire games complete with storylines and plots. Roblox expects to pay out more than $100 million in 2019 alone to these creators.13

Below, watch the video of the 19-year old who paid for his entire college tuition by creating a highly successful Roblox game. How did he do it? Inside the game, players can purchase upgraded weapons and vehicles.

Try and Try Again… or Pivot!

There’s a really important lesson that Angry Birds’ developer, Rovio Entertainment, can teach all of us in the mobile industry. It’s to never give up.

Before they hit it big with Angry Birds, they produced 52 games. All flops. Even Angry Birds initially flopped when it was launched in December 2009. Not enough interest from English-speaking markets.

So they decided to build a fanbase in smaller European markets. They hit Finland, Sweden, Greece, and Denmark and in the next couple of months garnered 40,000 downloads slowly and steadily. Rovio then approached independent game publisher Chillingo to push the app out to UK and US app stores. And Chillingo convinced Apple to feature Angry Birds on the front page of the UK App Store. Before long the app grew to 1 billion downloads.

Roblox was around as a PC game in 2005, but only exploded in popularity with the advent of its mobile versions.

Fortnite started out as an open sandbox game and was initially unsuccessful, until the decision to build a Battle Royale version where players could compete against up to 99 other players to be the last person standing. And from there it grew to become a cultural hit.

Ride the Nostalgia and Monetize It

There’s no denying that 2014’s breakout hit in the mobile gaming world was Pokemon Go. And it continues to be one of the top earning mobile games with $255,856 in daily revenue and approximately 17,812 daily installs.14

But what contributed to its success?

Well, nostalgia is a huge factor. The consensus for a specific age range of players is that the game was something they’d only dreamed of in their younger years. But nostalgia alone isn’t enough to keep the game going without the excellent gameplay, the effective use of Augmented Reality, and the entire socialization element.

Another big factor however is the creative way that developer Nintendo monetized the game. Brick-and-mortar establishments like restaurants and stores could buy Pokemon lures that would serve in attracting not just pocket monsters, but flesh-and-blood players who might also take the opportunity to spend some physical cash in their stores as they hunted virtual creatures.